I have a hypothesis about Queen Albia. Like my theory about where the Geisterdamen live, it's based on the premise that the Professors are very familiar with the classic works of SF, and are including as many nifty tropes as they can squeeze into Agatha's universe.

Albia is very old -- Countess Marie, Master Payne's wife, is her niece "many times removed, of course." Also, Gil mentions that to go against Queen Albia's wishes is literally unthinkable. What could he have meant by that?

Well, in this case, the classic work of SF is Curt Siodmak's 1942 novel Donovan's Brain. I'll let Wikipedia describe it:

The novel is written in the form of diary entries by Dr. Patrick Cory, a middle-aged physician whose experiments at keeping a brain alive are subsidized by Cory's wealthy wife. Under investigation for tax evasion and criminal financial activities, millionaire megalomaniac W.H. Donovan crashes his private plane in the desert near the home of Dr. Cory. The physician is unable to save Donovan's life, but removes his brain on the chance that it might survive, placing the gray matter in an electrically charged, oxygenated saline solution within a glass tank. The brainwaves indicate that thought—and life—continue. Cory makes several futile attempts to communicate with it. Finally, one night Cory receives unconscious commands, jotting down a list of names in a handwriting not his own—it is Donovan's. Cory successfully attempts telepathic contact with Donovan's brain, much to the concern of Cory's occasional assistant, Dr. Schratt, an elderly alcoholic.

Gradually, the malignant intelligence takes over Cory's personality, leaving him in an amnesiac fugue state when he awakes. The brain uses Cory to do his bidding, signing checks in Donovan's name, and continuing the magnate's illicit financial schemes. Cory becomes increasingly like the paranoid Donovan himself, his physique and manner morphing into the limping image of the departed criminal. Donovan's bidding culminates in an attempt to have Cory kill a young girl who stands in the way of his plans. Realizing he will soon have no control over his own body and mind, Cory devises a plan to destroy the brain during its quiescent period. Cory resists the brain's hypnotic power by repeating the rhyme "Amidst the mists and coldest frosts he thrusts his fists against the posts and still insists he sees the ghosts." With Dr. Schratt's help, he destroys the housing tank with an ax and leaves the brain of Donovan to die, thus ending his reign of madness.

"IT," the Big Bad of Madeleine L'Engle's A Wrinkle in Time is also an example of the "telepathically controlling brain in a jar" trope.

So basically I think that Albia started out as human and thus has descendants and a Royal Family. But she either was grievously injured or else simply grew old, and for the past two centuries she has been a brain in a vat ... growing in size and power, and controlling more and more of whatever is left of England.

She might even be on the outs with Klaus Wulfenbach because he somehow has the power to resist her.

But anyone else had better not cross her ... unless they've taken appropriate precautions!

Who's going to grab the crown?

(Gosh darn it, Professors! Invest in a spellchecker!) 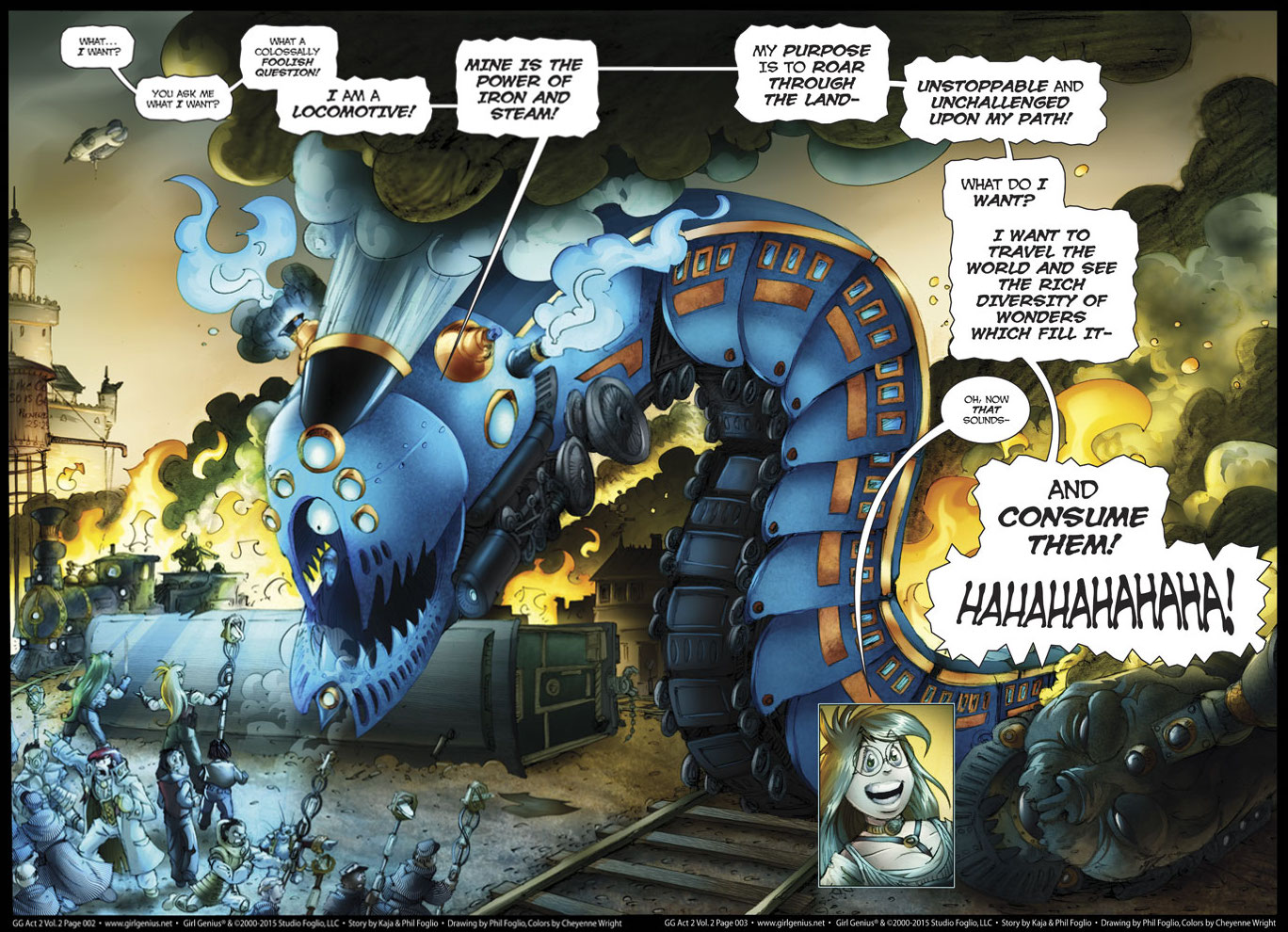 Elaborate speculations, almost certain to be invalidated by events ... but what the heck!

The eldritch extradimensional horror from beyond space and time has noticed the Time Bubble around Mechanicsburg, and it seems to be reaching down to the general area of the Red Cathedral with an arm/pseudopod/tentacle. What if it intends to remove a source of annoyance by extracting Klaus and his Magic 5-Ball? The good news: removing the Magic 5-Ball could free Mechanicsburg. The bad news: Klaus would be in big trouble. What would the eldritch horror do with him?

Well, one possibility is that it could hurl him back in time a couple of decades to before the start of the Other Wars. He's been wasped, so when he encounters Lucrezia he's subject to her control due to the command harmonics in her voice. This is why Barry Heterodyne and Tarsus Beetle believed Klaus to be in league with the Other -- because he was, although not willingly.

But wait! Mamma Gkika was also at the Red Cathedral, trying to grab the Magic 5-Ball. What if the eldritch horror extracts her, too? Here's where the really wild speculation starts ...

Gil tried to extract Vole from the influence of the Time Bubble, and Something Bizarre happened to him -- we don't know what, though. What if he transformed from Jägermonster back to human?

Scenario: Gkika is dumped thirty years in the past ... into Skifander, but she almost certainly doesn't realize that she's gone back in time. She, too, reverts to human. With centuries of experience as a Jägermonster, she develops a reputation as a fierce fighter and becomes Skifander's Warrior Queen, taking a new name in the process. She meets the exiled-by-Lucrezia Original Klaus -- now known as Chump -- and immediately tries to kill him, but she soon realizes that this young "Chump" fellow is not the Klaus who had the Magic 5-Ball and they become lovers. A year or so later, Mamma Gkika gives birth to twins. (The Professors like to do their foreshadowing in broad daylight.)

So where are time-displaced Klaus and Queen Zantabraxus now? Good question! Stay tuned.

If "Lady Selnikov" ever sees Rudolph Selnikov's head in his jar and doesn't recognize him, we -- and the characters in the story -- will know that the personality inside her skull had never met him.

And you know who I'm talking about when I refer to that "personality" ...

At least she didn't announce "I am the Selnikov lady!"

Hmmm. I think I may have stumbled upon a plausible resolution for several crises and mysteries. Tell me what you think of this scenario ...

After five years of stasis -- thirty months from now in story time -- Mechanicsburg un-freezes. Agatha and Violetta have been waiting for this, and as soon as the stasis field is gone, they race to the Cathedral to rescue Tarvek.

And they're too late. Tarvek is DEAD, and he's already decomposed far beyond any hope of revivification.

Some time later, Agatha gains access to the Time Window apparatus. (This may be when Bang saw her using it, or it might be on some other occasion.) Agatha has a plan -- perhaps suggested by Othar! -- that might allow her to save Tarvek after all. She can't rescue his body without creating a huge temporal paradox, but she can rescue his mind.

Seconds after Tarvek is hit by the poisoned dagger, Agatha zooms in and attempts to transfer his mind to a new body. But wait! There's a complication! The stasis field has altered the energy level of the Cathedral environment. She can't transfer his mind into another body in her own era.

But she can transfer it into a mind two centuries earlier. So Tarvek is downloaded into van Rijn's brain, allowing him to live a full life and to set up the various McGuffins (Otilia, Moxana's prophesies, van Rijn's notes, and so on) ... Perhaps Tarvek even meets a much younger Higgs and briefs him on what's going to happen. (UPDATE: Tarvek might even tell Higgs to be on a particular Wulfenbach airship so he'll be in a position to save Klaus' life.)

And one more wrinkle: Tarvek gets to marry Agatha after all! While observing Euphrosynia, it becomes clear to Agatha and others that she is Pure Evil. She's also doing things that are contrary to the legend, and unless she's stopped she will irreparably alter the timeline. So Agatha downloads a copy of herself into Euphrosynia's brain. Agatha-in-Euphrosynia goes into hiding right under Andronicus' nose -- with van Rijn! Eventually Andronicus wanders off to search the world for Euphrosynia, and Tarvek and Agatha live happily ever after.

And "meanwhile" two centuries later, Agatha and Gil finally get together.

UPDATE: There are two things I don't like about this scenario:

☹ What happens to van Rijn's original personality? Do he and Tarvek cohabit? Merge? Time-share? Or does Tarvek overwrite van Rijn? Does van Rijn accept Tarvek's mind willingly, or is he so evil that obliterating his personality is actually a good thing?

☹ If Tarvek is DEAD-dead and is too decomposed to be revived, then what was the point of the the long Si Vales Valeo sequence in Castle Heterodyne? The justification for that in storytelling terms was that Tarvek had died and been revivified, thus making him ineligible for the Lightning Throne in the eyes of the Fifty Families ... and since only Gil, Agatha, and a few others know that this happened, they can use their knowledge as leverage. If Tarvek dies from Tweedle's dagger wound, that entire segment of the story arc lacks any reason to exist.

Note: This is a re-post and extension of the list that originally was at http://girlgenius-lab.livejournal.com/578591.html. I'm putting it here because some people apparently had trouble accessing it at its former location.

If you say in the first chapter that there is a rifle hanging on the wall, in the second or third chapter it absolutely must go off. If it's not going to be fired, it shouldn't be hanging there.
— Anton Chekhov

The Professors have been adhering to the Law of Conservation of Detail. What they've shown us or told us in the narrative has been put in for a reason -- it's there for purposes of world-building, to establish characters' personalities, or because it's important to the plot. Okay, sometimes it's there just to be funny or cool. Some of the details that later turned out to be significant weren't immediately obvious as being important when we first encountered them ... in other words, they were Chekhov's Guns, waiting to be fired.

This exchange from the Professors' recent Ask Me Anything session got me thinking:

PKSchefflera
I have a question about revenants: You've said before that the wasps are just a vector for the parasites that really exert the control. Are those transmissible any other way? That is, are revenants contagious?